"Stage was stage, Cops enraged, Crying for more, It was war, war, war"

The above is an excerpt from the lyrics to the song Bedlam in Belgium on the Flick of the Switch album (August 1983). The song defininately marked Belgium as an (infamous) spot onto the AC/DC World Map!

For the last day of the EU leg of the Let There Be Rock-tour (9 October 1977), AC/DC was scheduled in Dancing Thierbrau in Kontich, Belgium, a concert organised by the Outlaws' Mechelen chapter. The show was organised in the sports hall next to the actual pub (where liters of Dortmunder Thierbrau pils were consumed). There weren't actually a lot of rock shows organised in the Thierbrau, so this was likely a one off. In those days, the Outlaws did the security for some of the AC/DC shows in Belgium. An eye witness told me it was rather scary to buy an entrance ticket out of a cigar box from one of the bikers. This is what the Dancing looked like. It is now a takeaway:

The sports hall was not really accomodated to host rock shows: the place had chairs and a stage made of wooden beer crats. The sports hall did not have the right power requirements to supply high voltage rock and roll: that was the reason the crew needed to head to brussels and look for power group equipment, making the show start later than scheduled. Meantime band and crew, and also locals could literally warmup, making use of the basket ball rings.

Some guys were chilling on a chair, waiting for the show to begin, until Angus started suddenly playing solos out of the dressing room. That sound was really loud an claimed by our eye witness to be much louder than any other band claiming at the time that they were louder than anything else.

At 9,30 pm the band could finally start playing. The hour indicated on the clock on the picture below, taken during the first notes of Live Wire:

Kontich had a strict 11 p.m. noise curfew, but the band was still performing. A small riot broke out when the local police tried to prevent the band from playing. They had to call for extra forces. What followed is a cat and mouse play between the band and the police forces, almost like a slapstick comedy. Cops followed Angus, who had jumped off stage duckwalking, into the crowd and hit him. Cliff Williams, who was then 4 months in AC/DC, also hit one cop with his bass guitar! The song also suggests fire arms being shown to enforce silence.

Angus on the move... 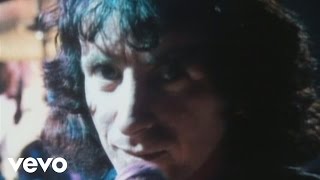